The microgravity team just submitted our final report to NASA on the research that we did on the weightless wonder. Here is our team video: http://www.youtube.com/watch?v=IDTSGS88Kko

I expected to spend the entire night working on the report. I guess I will work on tuning the tricopter a bit more. I built a new small frame that seems to work well. I just need to get it as stable as the previous two frames. 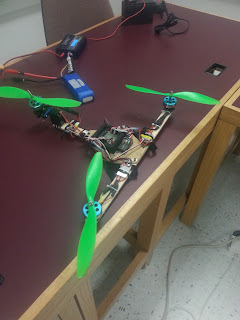 A few days ago I destroyed the frame that I have been flying for the past two weeks. I made a nice pile of broken parts: 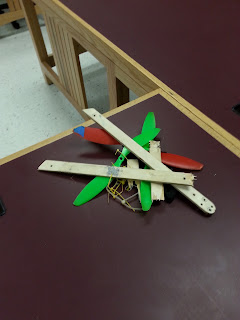 I'm running a kk2.0 board with 1.6++ firmware. I tried to do a flip with autolevel on. I stood the copter on its tail end and it fell to earth. A couple of days later I put together this thing: 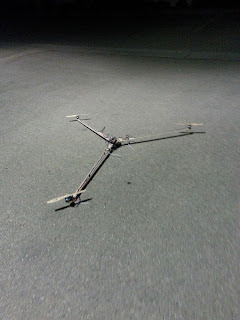 Two dt700s in the front and a dt900 in the back. It flew for 15 minutes or so. The booms are made from ~4'x1.5"x0.5" balsa. After flying it once I have decided to rebuild it into a much smaller and lighter form. I'm going to work on it tonight and hopefully will have a smaller version built by tomorrow. The huge tricopter was a little too intimidating. The balsa arms were far too fragile also and they broke twice before I even got it off of the ground. I will try a version with stubby plywood arms this time.