And it begins... Finally. 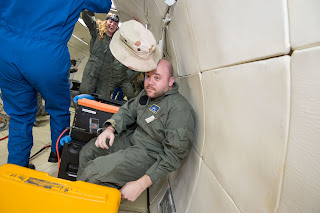 A few days ago I flew an experiment aboard the Vomit Comet. I'm now on my way back to Boise to start looking at our captured data and possibly relax for a while. I think I will finally be able to work on my tricopter and start on a game project. First lets rewind a bit.

I knew I wanted to get into game development when I was a kid. I remember playing a game called "Privateer" and thinking how awesome it would be to make a game where I could interact with other people in this game world. A few years later I found myself alpha testing Eve with just a few dozen other people. I started school working towards a degree in computer animation. I enjoyed creating models in 3d Studio Max and playing around with effects and particle systems. I got started with graphics programming in the Glide API and C++ around this time. Instead of graduating I joined the Air Force.

I worked in the Air Force as a flying crew chief on KC-10s. I spent hundreds of hours on an airplane working on my personal programming projects. I seemed to be interested in creating terrain engines with dynamics such as erosion and fluid flows. I got a lot of experience in the military and I was able to work all over the world. I completed my four year enlistment and moved to Michigan.

In Michigan I worked towards a degree in computer programming. I completed a few honors projects where the entire class would test small games I was developing. At this time I found out that I am a habitual overachiever. After a few years in Michigan I moved near my family in Idaho.

I started school at Boise State University going for a degree in computer science. I really enjoy learning about programming and I intend to apply what I have learned to creating my own games. My pursuit of programming skill was noticed by an instructor of mine. My instructor introduced me to the microgravity team. The rest, as they say, is history.

I helped create the data capture software that flew on last years experiment. I felt proud that I was able to facilitate this experiment and that my software actually flew on the "Weightless Wonder" and completed NASA research goals. Over the last year we have been working on an improved version of our experiment and these past ten days have been amazing.

I was privileged to be able to present our experiment during the Test Readiness Review. I was able to represent all of the other scientists on our team and explain our apparatus. I have gained a family while working with this team and we have all put thousands of hours into this experiment.

A few days ago I flew with our experiment. We developed our apparatus to be fully autonomous and that allowed me to enjoy this experience. I had been waiting for an "Okay, I made it" moment. More people have climbed to the top of Mt. Everest than have been in zero gravity.

None of this would have happened if I had not wanted to develop my own games.

This project has greatly improved my self-confidence as a programmer. I have been so busy with school and work that I have not been putting time into my own projects. My projects are far more important to me than any of this.

I have been putting it off long enough. I never planned to be a scientist. Today I begin my transition into independent game development.

My name is Daniel Lambert and this blog will be dedicated to keeping track of my personal projects.